For someone who rarely takes airplane precautions seriously (sleeping through virtually every announcement), when the flight attendant of my TransAsia flight told me to buckle my seatbelt due to the turbulence, I listened. I listened because the headwind descending into Taipei was really strong, and I listened because TransAsia is one of those airlines whose first few Google search results are damage control articles for the several highly-publicized crashes they’ve had over the past few years. But flights to Taiwan are surprisingly expensive and my choices were limited, so I decided to be cheap and put my life on the line (not really, but to be fair, that flight was actually turbulent). Needless to say, I made it and I live to tell (or write) the tale.

In some ways, Taiwan is to China is what Cuba is to America (oh man, I’m going to get so much flack for saying that). Direct flights from the Mainland to Taiwan only began in 2008 and there are still only a handful of cities whose residents are allowed to visit the tiny, renegade island. This helps to explain why flights are usually sporadic, turbulent, and expensive. Taiwan is a small time capsule – China without the throngs of people, without the poison air, the poison fish, or the poison water. The hotel may have warned us that Taiwan water is not potable, but everyone I met said otherwise. Taiwan is only an hour away from Shanghai. But why does it feel so different?

Not the best name for the Eataly of Taiwan, isn’t it?

But let me set the scene: Tucked away from the heat of the street (did I mention Taipei is around 97ºF during the day?), the plastic sheet doors bring a cool air and tanks of giant crabs softly scraping at the edges of the water, abalone, mollusks, spindly lobsters, sweet shrimp, tiger shrimp, giant shrimp, geoducks, mussels, oysters, and coral-colored fish. It’s dizzying and intoxicating and I want to eat all of it. 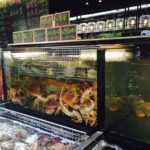 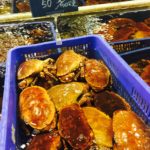 We find our table at Tresors de la Mer and the waiter sprays hand sanitizer on our hands, shows us how to grind green wasabi root by hand, and wraps our hands in warm towels. When the sashimi, sweet shrimp filled with roe, oysters, abalone, salmon roe, and raw scallops come to the table, L tells us that there are five more courses. I’m in heaven. Taiwan is heaven.

Wooloomooloo and other unpronounceable cafes.

Taiwan is quiet. The streets are only half-full and we can walk as a group of seven without needing to push our way through the streets or through countless old ayis.  We stop by Wooloomooloo for a glass (or a bottle) of cider and an espresso. We get Fujin black tea ices at a nearby cafe. I’m pretty sure it is the least photogenic dessert I’ve ever seen, but it is both sweet and bitter and most importantly – cold. We get glasses of sparkling wine at a small coffee shop tucked behind two separate ceramics stores. That’s the nice thing about Taipei – finding these secluded spots and making them your own. 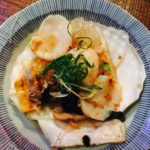 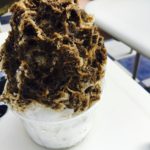 Having been to Hong Kong, Macau, and now Taipei, it’s easy to say: oh this place is just like China if the cultural revolution never happened and the western influence continued. And on some levels it’s both true and false. Taipei and Hong Kong remind me more of the typical portrayals of China we see on TV – large neon signs on the sides of buildings and street peddlers selling bubble tea. China is brash, hardened, pushing to bring in Western influence, but also rejecting it. Taiwan is more traditional (well, the writing is traditional), it’s more laid back, the China that you read about in old poetry, the way that people talk about the Southern provinces and their lifestyle of sipping tea on lakes. I’m not sure where Taiwan fits into this narrative, but it’s a really special place, and spending two days in Taipei was not enough.