It always seems that the more West one goes into China, the more starkly you feel that you have entered the East. Parts of western China seem trapped between the ravages of 1970s Russian communism and pre-1920s Chinese imperialism, and I sort of love that, because time and time again, trips out of Shanghai makes me realize that where we live is an oasis, that Shanghai so very little resembles the rest of China, and that there is still so much of China that I, to this day, haven’t really begun to understand.

We land in Xi’an at nearly midnight and walk across the needlessly spacious airport to find the cab stand, taking one, that runs on natural gas, not gasoline, directly into the walled city, past miles and miles of underdevelopment, smokestacks (raising the AQI with each exhale of the factory burn-off), grey fields, grey skies, and a landscape that demands a T.S. Eliot-like exposition.

Inside the walled city, we find old men on bicycles, fading facades, and blocks of hardware stores manned by sour-looking ayis. We settle down in our hotel and fall asleep by 2:30am.

The next morning, I am immediately hungry when I wake up and D and I venture into the Muslim district, where even at 10:30 in the morning, bits of lamb are skewered and roasted on makeshift propane grills while Russian techno blares from every direction.

In the Muslim district, we find: 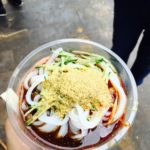 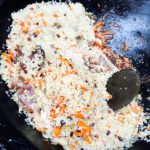 What we don’t find are Biang Biang noodles, whose claim to fame is being one of the hardest characters to write, even in simplified Chinese  –

Lips still tingling from Shaanxi chili oil, we leave the Muslim Quarter and head out to the city wall to grab a tandem and bike around it. I am too tired to write about the rest, so that’ll be for part II. But all in all, Xi’an is wonderful. Feeling all alone, from the other side of the world